You are here:
March 9, 2016Leave a commentPublicationsBy admin 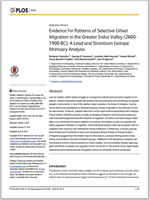 Runners are often categorized as forefoot, midfoot or rearfoot strikers, but how much and why do individuals vary in foot strike patterns when running on level terrain? This study used general linear mixed-effects models to explore both intra- and inter-individual variations in foot strike pattern among 48 Kalenjin-speaking participants from Kenya who varied in age, sex, body mass, height, running history, and habitual use of footwear. High speed video was used to measure lower extremity kinematics at ground contact in the sagittal plane while participants ran down 13 meter-long tracks with three variables independently controlled: speed, track stiffness, and step frequency. 72% of the habitually barefoot and 32% of the habitually shod participants used multiple strike types, with significantly higher levels of foot strike variation among individuals who ran less frequently and who used lower step frequencies. There was no effect of sex, age, height or weight on foot strike angle, but individuals were more likely to midfoot or forefoot strike when they ran on a stiff surface, had a high preferred stride frequency, were habitually barefoot, and had more experience running. It is hypothesized that strike type variation during running, including a more frequent use of forefoot and midfoot strikes, used to be greater before the introduction of cushioned shoes and paved surfaces.