Integrated evidence-based extent of occurrence for North American bison (Bison bison) since 1500 CE and before.

You are here:
July 22, 2022Leave a commentPublicationsBy admin 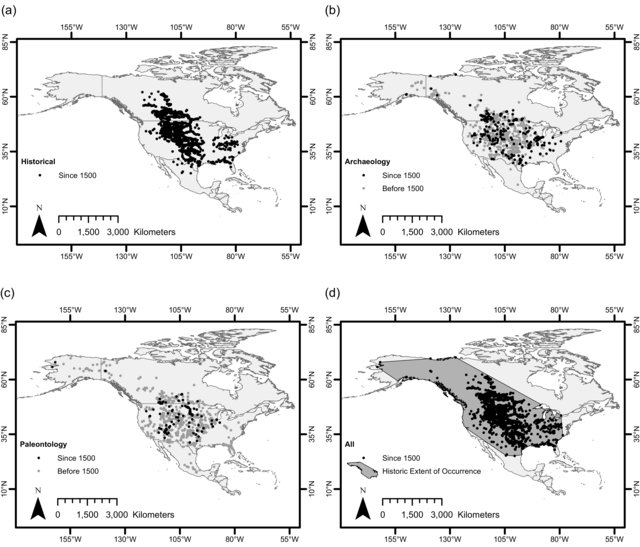 Following the near extinction of bison (Bison bison) from its historic range across North America in late 19th century, novel bison conservation efforts in the early 20th century catalyzed a popular widespread conservation movement to protect and restore bison among other species and places. Since Allen’s initial delineation (1876) of the historic distribution of North American bison, subsequent attempts have been hampered by knowledge gaps about bison distribution and abundance previous to and following colonial arrival and settlement. For the first time, we apply a multi-disciplinary approach to assemble a comprehensive, integrated geographic database and meta-analysis of bison occurrences over the last 200,000 years BCE, with particular emphasis over the last 450 years before present. We combined paleontology, archaeology, and historical ecology data for our database totaling 6,438 observations. We derived the observations from existing online databases, published literature, and first-hand exploration journal entries. To illustrate the conservative maximum historical extent of occurrence of bison, we created a concave hull using observations occurring over the last 450 years (n = 3,379 observations) which is the broadly accepted historical benchmark at 1500 CE covering 59% of the North American continent. While this distribution represents a historic extent of occurrence — merely delineating the maximum margins of the near-continental distribution — it does not replace a density-based approach reconstructing potential historical range distributions which identifies core and marginal ranges. However, we envision the contained observations of this database will contribute to further research in the increasingly evidence-based disciplines of bison ecology, evolution, rewilding, management, and conservation. There are no copyright or proprietary restrictions on this data, and this data paper should be cited when these data are reused.